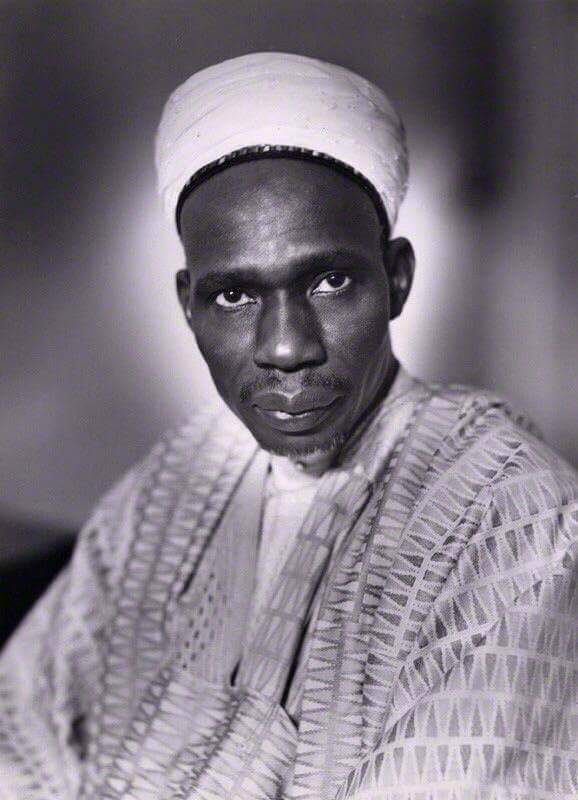 In contrast with the largely aristocratic ruling elite in the north, many of whose ancestry derives from royal lineage, Balewa had very humble origins. His father was a slave who rose in service of the Madaki of Bauchi and became a district head.

According to family oral history, Balewa’s paternal grandfather Isa was murdered in front of his family by his rival’s agents. Isa’s widow then took her infant son to Bauchi, where the Madaki of Bauchi took her in. Abubakar was born in December 1912 in the village of Tafawa Balewa, in modern day Bauchi state. He was his father’s only child. The name of his birthplace was appended to Abubakar’s name (Abubakar Tafawa Balewa). Tafawa Balewa village takes its name from two corrupted Fulani words: “Tafari” (rock) and Baleri (black). This may have contributed to the “Black Rock” nickname he acquired in later life. Although it is widely (incorrectly) presumed that he was Hausa, Balewa’s father Yakubu Dan Zala was in fact of Bageri ethnicity, and his mother Fatima Inna was Fulani.

He attended Quaranic school and learnt the first chapter of the Qur’an by heart. For his Western education he attended Bauchi Provincial School. According to his teacher and classmates he was a shy, quiet and not outstanding student. Although reserved by nature, he did commit a disciplinary infraction when he was caught outside school without permission, and smoking with his friends to boot. He was whipped as punishment.  One of his juniors at school was Nuhu Bamalli (later Foreign Minister). He later attended Katsina Teacher Training College (1928-1933) and graduated with a third class certificate. His best subject was unsurprisingly, English. He became a teacher and irritated by a friend’s remark that no Northerner had ever passed the exam for a Senior Teacher’s Certificate, Balewa duly sat the exam, and obtained the Certificate. He became headmaster of the Bauchi Middle School. He reported that the first white woman he ever set eyes on was Dame Margery Perham (a renowned academic on African affairs) when she visited Nigeria on an investigation of native administration.

In 1945 he and other northerners (including Aminu Kano) obtained a scholarship to study at the University of London’s Institute of Education (1945-1946), where he received a teacher’s certificate in history. When he returned to Nigeria he said he now saw the world with “new eyes”. Balewa said he:

returned to Nigeria with new eyes, because I had seen people who lived without fear, who obeyed the law as part of their nature, who knew individual liberty”

He returned to Nigeria as a Native Authority Education Officer.

Balewa was no firebrand political radical. He may have remained a teacher for the rest of his life had southern politicians such as the flamboyant intellectual Nnamdi Azikiwe not pushed for Nigerian independence. Although not overtly political he founded an organisation named the “Bauchi Discussion Circle” in 1943, and was elected vice president of the Northern Teacher’s Association (the first trade union in Northern Nigeria) in 1948. Anxious not to be politically upstaged by the southerners, Northern leaders sought educated Northerners to serve in political posts. Balewa helped found the Northern People’s Congress (NPC), which was originally intended as a cultural organisation but by 1951 morphed into a political party due to the need to present a Northern response to the rapid and sophisticated political groupings emerging in the south.  Balewa was called into political service as the Bauchi Native Authority’s representative to the Northern House of Assembly.  The House of Assembly also selected him to become a member of the Nigerian Legislative Council.

Despite political involvement, Balewa remained suspicious of Nigerian unification and feared that the Northern Region would be dominated by the better educated and dynamic south. He said that “the southern tribes who are now pouring into the north in ever increasing numbers…do not mix with the northern people in social matters and we…look upon them as invaders. Since 1914 the British government has been trying to make Nigeria into one country, but the Nigerian people themselves are historically different in their backgrounds, in their religious beliefs and customs, and do not show themselves any sign of willingness to unite. So what it comes to is that Nigerian unity is only a British intention in the country.”

He later became the federal Minister of Works and in 1954 Minister of Transport and the senior minister and leader of the NPC in the House of Representatives. His conversion from regional to federal outlook came after he visited America in 1955 on a fact finding mission.  He reminisced that

In less than 200 years, this great country [America] was welded together by people of so many different backgrounds. They built a mighty nation and had forgotten where they came from and who their ancestors were. They had pride in only one thing —their American citizenship… I am a changed man from today. Until now I never really believed Nigeria could be one united country. But if the Americans could do it, so can we.”

Even though Balewa was only the deputy leader of the NPC, the NPC leader the Sardauna of Sokoto sent Balewa to Lagos to become the federal Prime Minister in 1957.  The Sardauna had no interest in living in the south. When Nigeria became independent in 1960, he became the newly independent country’s first Prime Minister and received the instruments of independence from Princess Alexandria (cousin of Queen Elizabeth II). Although the country’s Prime Minister, he was not the leader of his own party (the NPC) and thus remained in the paradoxical position of being a head of government that had to defer to, and take instructions from his boss (the Sardauna).

In 1963 he gave a spellbinding eloquent speech at the Addis Ababa (Ethiopia) inaugural conference of the Organisation of African Unity. As Prime Minister he maintained a thoroughly dignified comportment.  A British acquaintance called him “perhaps the perfect Victorian gentleman”. He gained several awards from the British: OBE in 1952, CBE in 1955, Knighted by Queen Elizabeth II in January 1960 and was awarded an honorary degree by the University of Sheffield in May 1960.

Balewa proposed an amendment to Nigeria’s constitution to give due recognition to the nation building role played by then Governor-General Dr. Nnamdi Azikiwe. Balewa proposed that “Nnamdi Azikiwe shall be deemed to have been elected President and Commander in-Chief of the Armed Forces” because “Nigeria can never adequately reward Dr. Azikiwe” for the nationalist role he played in building Nigeria and achieving independence.  Azikiwe is referred to by name in Nigeria’s 1963 constitution, and to my knowledge Azikiwe was the only living individual constitutionally enshrined by name in his democratic country’s constitution.

On January 15, 1966 he was kidnapped from his official residence by armed soldiers who were executing Nigeria’s first military coup. He was missing for several days and a search for him was ordered by the new military regime headed by Major-General Aguiyi-Ironsi. His family and friends continued to believe he was alive. Rumours claimed the rebel soldiers were holding him alive and that he would be released as part of a prisoner swap involving the imprisoned Chief Awolowo.  However these hopes were dashed when his decomposing corpse was found a few days later, dumped in a roadside bush.  His corpse was taken to Ikeja airport in the company of Police Commissioner Hamman Maiduguri, Inspector-General of Police Kam Selem, Maitama Sule and his wives Laraba and Jummai who accompanied it as it was flown to Bauchi where he was buried. His body now lies inside a tomb declared a national monument. The tomb includes a library and a mosque. The famous race course square in Lagos was renamed “Tafawa Balewa Square” in his memory. His image appears on the 5 Naira note.

As the Presidential Campaign Begins By Abdul IkonAllah