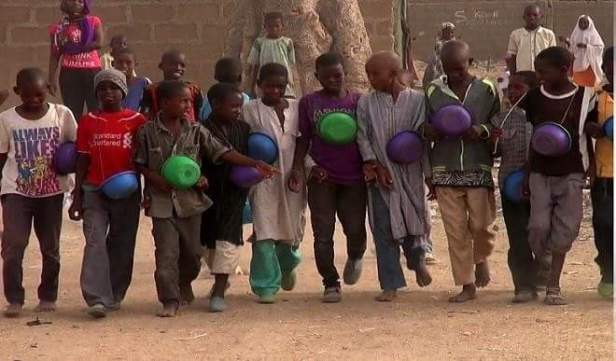 The broken home of the northern family.

In effortless ceremony, a man got hitched to his wife and swiftly a family setting begun. In no time, Allah bless them with a boy and joy raided the air.

Just as the boy clocks three years, he is escorted by the father into the city to learn the Quran. Yes, a three year old is forcefully pulled away from his mother to God knows where! The father returns home to the embrace of his wife in kulle. Putus -another baby is on the way as the first one is left forgotten.

The mallam in his wisdom has been blessed by Allah and using his economic dexterity, he sends the poor child into the street to ask for arms. In the harshest of the street, the 3 years old boy learns survival instincts.  He battles ruggedly against unexpected elements. In no time, he becomes a champion of the street.

Unfortunately, he is cut off from the affinity of family bonds, he has no relations to share feelings with as this lad is left for the street to mould him into her dictates. He becomes vicious, angry and paranoid. To subdue his anger against his mallam, he is told never to question his conditions as it is Allah’s will for him. He is told to hate those who don’t belong to his religion and with unmitigated fury, he brews in anger against the people in the society.

With age catching up with him, the street becomes uninhabitable for him. He can’t longer beg because no one give alms to an able bodied man. He resorts to crime-from picking pockets to petty stealing and eventually to violent crimes. He is completely a nuisance to the society. The lucky ones amongst his peers are recruited into political thuggery  and others brainwashed into religious fundamentalism.

As the circle of the almajiri life continues, he is arrested for any of the crimes above and made to serve jail terms. After years in confinement, he comes out more bitter,frustrated and hopeless. With no task to do, he takes to selling water and ridding okada. Again, he continues his romance with the streets.

Like a walking corpse, he moves around with fist of furry and stained mind of hate. He is quick to start a fight because he has nothing to lose. Because you are too sophisticated to him, you treat him with disdain and quick to pour verbal venom on him. In the blink of an eye, he draws out his pocket knife and press it to your fine body. While you writhe in pains, he flee into the streets because that is where he belongs. You learn a lesson never to engage the almajiri in a fight.

Suppressed eventually by age, he become weak in the hustles of the streets and resort finally to begging as curtain of life draws on him. As he battles to bid farewell to his unfair life, he look back at the offspring of his groin -the next almajiris of his legacy.